If you are thinking of adopting a child, there are probably a million questionsÂ running through your mind. And this post serves to answer them all.

What you need to know at the onset

Adoption laws were changed in August 2015 with the hope that it would beÂ easierÂ for people to adoptÂ children who need a loving home and family. However, data on the CARA (Central Adoption Resource Authority) website indicates that this has not been the trend. In 2010 the number of in-country adoptions was 5693 and in 2015-16 the adoptions were a dismal 3011. Adoption rates have actually come down. 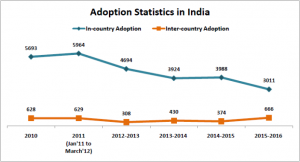 Are you eligible to adopt a child?

You may also like: How adoption helped this mom find love in the journey of motherhood

The Old and the New

The new adoption reforms have been lauded by some while others feel it still leaves a lot to be desired.

What is the procedure for adoption?

You May Also Like: Why All Couples With Kids Must Talk About Adoption

Adoption was always an option if you couldn’t conceive. But now the times have changed and there are more and more people who are consciously wanting to adopt a child instead ofÂ producingÂ one of their own “tummy babies”. Sneha SrivastavaÂ who lives in Maryland, U.S.A has a 12-year-old daughter. A fewÂ months ago she adopted aÂ 6-year-old boy from India. The reason forÂ her decision? “I wanted to give a childÂ a second chance at life and wanted this innocent little boy to become a part of a loving family – something that everyone deserves”.