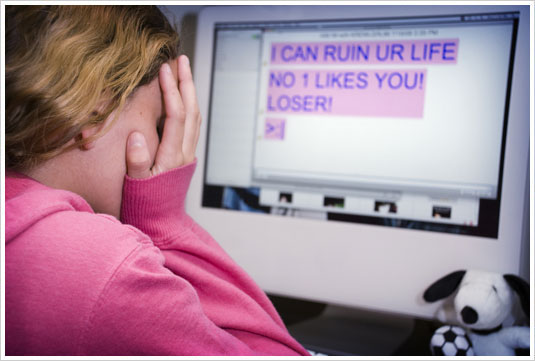 Over half of the Indian children who surf Internet face cyber bullying — getting threatened or being harassed online — aÂ MicrosoftÂ study has found.

What is cyber bullying?

Cyber bullying can be defined as use of technology to harass, threaten, embarrass or target another person.

The survey was conducted among more than 7,600 children aged 8 to 17 years across 25 countries, including Australia, France, Germany, Japan, Pakistan, Russia, Spain, the UAE, the UK and the US.

The survey focused on how kids are treating one another online and whether parents are addressing online behaviours.
According to Microsoft’s ‘Global Youth Online Behavior Survey’ of 25 countries.

1.Â India ranked thirdÂ with 53 per cent of respondents (children aged between 8-17) saying they have been bullied online, behind China (70 per cent) and Singapore (58 per cent).

3.Â About 45 per cent of parents (respondents) said they teach their children online manners.

4.Â The survey showed that about 38 per cent of the schools (attended by respondents) have formal policies on cyber bullying.

5. While children want to talk to parents about the issue, only 29 per cent of the children said their parents have talked to them about protecting themselves online.

So adults (parents and school) should discuss the issue with the children and provide guidance on how to identify and respond to a range of online behaviors from online meanness to bullying and beyond. Its no longer restricted to just monitoring your child’s behaviour but also helping him deal with the bullying.