After years of being involved in The Church of Scientology it was reported that Tom Cruise, 52 took a verdict that none of us would have ever dreamed off. Tom Cruise is planning on cutting all ties only for his daughter! We were stunned to hear this too! Apparently Tom Cruise realised that heâ€™s missing out on all the lovely moments of his daughterâ€™s childhood said an insider at Star Magazine. 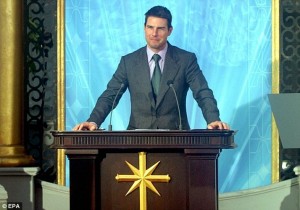 An insider expounded toÂ StarÂ magazineÂ how Tomâ€™s recent phone call with Suri made him realize he needed to get out. â€œShe was going on and on about her ballet class and how much she loves it. Thatâ€™s when Tom realized heâ€™s never seen her perform ballet and he started to tear up,â€_x009d_ the insider claimed. â€œIt hit him that sheâ€™s growing up before his eyes and heâ€™s not there to witness most of it. They talk on the phone and video chat, but itâ€™s not the same.â€_x009d_

TheÂ source went on to explain the predicament Tom is allegedlyÂ in.Â â€œTom has been under tremendous pressure where SuriÂ and Katie are concerned because the church doesnâ€™t want him close to them. They canâ€™t stand that their own poster boy isnâ€™t raising his child in the church,â€_x009d_ the source said. â€œIf they label SuriÂ a suppressive person (a Scientology term for an enemy of the church), as theyâ€™ve been known to do with dissenters, that would make it hard for Tom to have a relationship with her. Heâ€™s between a rock and a hard place, but heâ€™s finally making a choice to put his daughter first,â€_x009d_ the source continued. â€œTom has missed birthdays, school events, all the special parts of childhood that happen so fast and are gone before you know it. Suri is not a baby anymore; she is fully aware that her father isnâ€™t around much,â€_x009d_ said the insider. â€œWhen she speaks to him on the phone, itâ€™s becoming more and more like sheâ€™s talking to a stranger.â€_x009d_ This is absolutely heart-breaking.Â  Who ever thought that Tom Cruise would take such a drastic decision? However if he does we wish the best for him and certainly hope he manages to mend his relationship with his daughter.